In the Nomzamo informal settlement in Orlando East, Soweto, service delivery, and hope, are in short supply. Few believe the 1 November vote will change that. 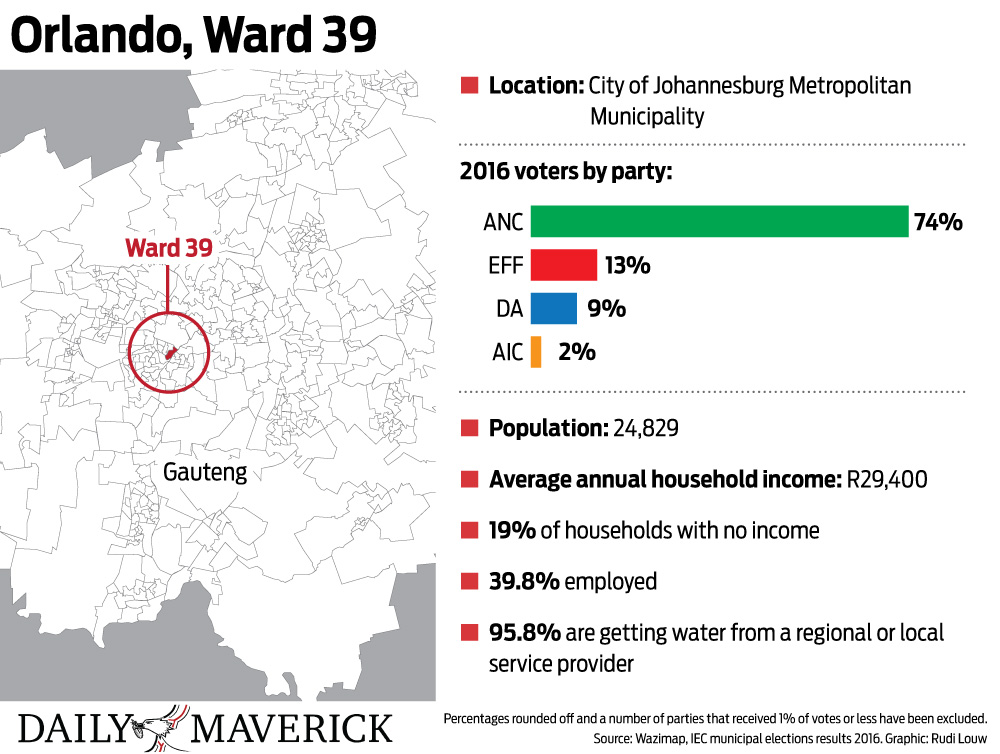 “Many of us parents have accepted that the highest education our children can attain is matric. We are raising a sad and hopeless generation of future leaders,” said Ntombikayise Jona.

Avela Jozi, who has been sitting at home for years since he completed his matric, said: “We are cursed in this community and feel like we are not part of this country.”

Sihle Nyanga said: “I completed my matric in 2019 and have been applying to higher learning institutions that include the University of Pretoria and the University of Cape Town, with no luck of being admitted. I have been on the ‘waiting list’ and this is taking a mental toll on me. I am so depressed I cannot afford to be alone because I always think about an escape of either drinking alcohol, smoking or throwing myself at boys.”

The service delivery problems in Nomzamo run deep. Electricity supply to the area has been disrupted for years. There aren’t enough toilets in the overcrowded informal settlement and crime rates are high.

“Maybe if Mam’ Winnie was still around the circumstances would not be so dire. Maybe we would benefit from service delivery and all residents would have their houses,” said Thembeka Mashwawu, a community activist.

Various political parties have campaigned in Nomzamo, making promises that sound empty to a community that has heard it all before.

The ANC kicked off the election campaign in Soweto with door-to-door visits in Nomzamo and Chiawelo on 18 September 2021. President Cyril Ramaphosa and Gauteng Premier David Makhura made promises to provide electricity, water and houses.

Houses in Nomzamo have been cut off from electricity for years while many of the residents who live in shacks rely on illegal connections.

Within 20 days of Ramaphosa and Makhura’s visit, Eskom restored some electricity transformers that were shut down about three years ago due to a dispute which stemmed from irregular distribution.

But according to Nomzamo residents, fewer than 100 of the 485 houses have been connected to electricity and more than 1,300 shacks remain without formal connections. Residents said solar panels should be installed to solve the crisis.

Mfundo Bera, a resident of Nomzamo, said: “We have elderly people whose medication requires refrigeration but because of the lack of power they have to take the medication even after it expires. On the other hand, I am an emergent sports commentator but I cannot do my research because we have no power.”

Wandile Rafuza, another local activist, said: “Our children go to school daily smelling of paraffin. This affects their self-esteem when they are with their peers and may affect their school performance.”

Bera said the lack of electricity makes residents more vulnerable to crime when it gets dark.

The ANC’s Ward 39 councillor, Sechaba Khumalo, said electricity infrastructure had been damaged due to cable theft while the local system was down for three years, but the police had made some arrests.

He claimed four of the seven transformers in the area had recently been revived, but Daily Maverick has established that only two are now operational.

“The message I received was that four transformers were up and running now,” he said, adding that Eskom technicians have the required material and are responsible for restoring the other transformers.

Residents also claimed the police were working with criminals, leading to rampant crime in the area, including robberies in broad daylight and in full view of other residents.

“I was part of the team that went out on patrol with the police to confront occupants of the many places selling drugs in the area. What would happen is that we would see other officers not assigned to the community going into those homesteads and coming out all smiles,” said Mashwawu.

Residents said the police ignore them when they report criminal activity, claiming locals have a reputation for taking the law into their own hands.

“They say they cannot come into the area but they are always here to see their girlfriends in state cars and in full state uniform. As a result of the police ineptitude, people are discouraged from reporting crime,” said Bera.

Councillor Khumalo said: “I agree that we need to strengthen our police relations and hold our police accountable but the community should also cooperate.”

The informal settlement is near the old, decommissioned Power Park substation behind the landmark Orlando Towers, where several people died in 2014 when the structure collapsed while they were stripping metal for resale at scrap yards.

The structure has an enormous waterlogged hole which parents say they are battling to keep their children away from.

Accessing health services is also challenging. Residents have to walk about 20 to 30 minutes to the nearest clinic because ambulance drivers refuse to enter the area to collect patients because there are no proper roads.

There are shared mobile toilets in Nomzamo but they are too few and are often a long walk away. In one part of the informal settlement, dozens of people share six toilets, which sit next to an area where people dump rubbish.

Another enormous dump, which doubles as a toilet, is surrounded by shacks and is not visible from the main road. Here, residents live alongside rodents amid the filth and stench. Most of the mobile toilets are filthy and broken.

Mashwawu said her nephew has to dish up an extra plate so his sleep is not disturbed by rats that stalk the shacks daily. Khumalo said the illegal dumping in Nomzamo is out of control, partly due to overcrowding in an area that was designed for 450 formal homes.

Sechaba said there were structures working with Pikitup to limit illegal dumping. There was little indication that the situation had improved.

When it comes to water, residents told Daily Maverick a few JoJo tanks and communal taps were provided.

On whether Nomzamo residents will vote in the 1 November local elections, Jona said she will cast her ballot despite the neglect, because by voting she is exercising her right as a citizen.

Rafuza said: “Voting is a waste of time. We vote to enrich certain people every five years. We are nothing more than stepping stones to better their lives and those of their families and friends.” DM